The Baroque feast “La Scamiciata “ will be presented once again this year in the traditional form which derives from the historical sources of the Cabrei and Sampietro , as well as from oral tradition. The celebration consists of three moments: the first takes place in Pozzo Faceto , where the shrine of the Patron Saint is kept; the second in Pezze di Greco , on the main road connecting the Sanctuary to Fasano ; finally in the town of Fasano.

“ La Scamiciata “(a dramatization of the people’s merrymaking after the victorious battle against the Turks) stars with the costume pilgrimage to the sanctuary of Pozzo Faceto. Here an extraordinary ceremony is held during which the labara of the three Patron Saints , Stephen, John the Baptist and the Madonna del Pozzo, are blessed ; a supplication is then sung which asks the Virgin to protect the town. After a short stop in Miracle Square, the procession turns back to Fasano through Pezze di Greco.

As usual the spectacular parades of the guest towns will open the historical cortege “ La Scamiciata” . The cortege is headed by the town crier, who recites the words inscribed on the 1678 plaque in Via del Balì . This commemorates the brave citizens of Fasano, who, with the help of the ” Powerful of the Earth “, fought against and defeated the Turkish invaders after being taken by surprise and unprepared during the night sleep. The crier also invites the citizens to take part in the solemn ceremonies and pay homage to the valorous forefathers . The battle between the Fasanesi and the Turks is then dramatized . The highly emphasized contrast between the wrath of the vanquished and the exultancy of the winners offers a fascinating show to the viewers. These are continually involved in the dramatic performance along the way. Sound of clarinets, roll of drums and waving flags enhance the beginning of the great feast which will remind the townspeople of the glorious past and make them feel proud of the old victory.

The Universitate stendards, a lady carrying the city keys, the dignitaries and the members of the noble families with their own coat of arms open the parade. They are followed by Balì of St Stephen‘s flag , Lieutenant fra’ Zurla da Crema sitting on his coach next to the mayor Pompeo Mignozza ; a third group is opened by Balì of Malta’s flag followed by fra Brancaccio before his own coach and then a joyful crowd, interpreted by local folk groups . The chief of the Turks is escorted by armigers and , following him ,“ La Scamiciata” , who sing traditional Apulian and Neapolitan songs while dancing around the vessel shaped triumphal carriage, where “ The Scamiciata” hoist the labara of the Patron Saints : Our Lady of Pozzo Faceto, St. John the Baptist and St. Stephen. 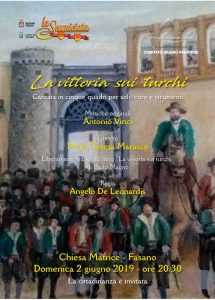 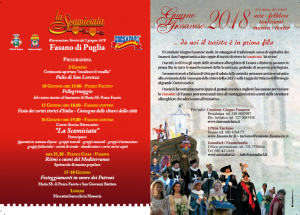